This is the 10th post in a biweekly series. Read about the series — and just what we mean by “freestyle music” — here. Freestyle Fridays post on the first and third Fridays of each month.

“Domino Dancing” is the lead single on the Pet Shop Boys’ 1988 album, “Introspective.”

Written by Chris Lowe and Neil Tennant, and influenced by Latin pop, the song was produced by Lewis A. Martinée, the Miami-based producer who founded freestyle group Exposé, and worked on singles by the Cover Girls and Debbie Gibson.

After PSB’s three number one singles in 1987 and 1988, expectations were high for “Domino Dancing.” But the public reception to their new Latin sound proved disappointing. Neil Tennant remembers: “…it entered the charts at number nine and I thought, ‘that’s that, then – it’s all over’. I knew then that our imperial phase of number one hits was over.” The single peaked at Number 18 in the US, and was PSB’s sixth and last Top 20 pop hit in the US.

The Pet Shop Boys debuted in 1986 with “West End Girls,” and I was immediately smitten. Their first five albums (“Please,” “Actually,” “Introspective,” “Behaviour,” and “Very”) happened to coincide with milestones in my life: going off to college, meeting and dating my eventual husband, starting life post-college in Boston, coming out to myself and my family, finding a home and community. Being a dedicated PSB fan was a core part of my identity. My friend Adrian and I even dressed as PSB for a Halloween costume party in college – to mixed results.

I loved the album “Introspective,” which I’ve always read as PSB exploring and deconstructing various contemporary musical styles, and incorporating them into their work to create new, clever, incredible songs. “I Want a Dog” seems to be a deconstruction of house music tropes, while “Left to My Own Devices” is a theatrical, symphonic rhapsody that practically name-drops Andrew Lloyd Webber. “Always On My Mind/In My House” and “It’s Alright” were, I think, PSB’s first cover songs (afterwards, their 90s albums almost always featured a campy, bombastic cover as a lead single). “Domino Dancing” had freestyle trappings – but, for me,  it’s always been the album’s one skippable single. Up to that point, I’d always relied on PSB for incredible, lush production, clever and funny lyrics, and incredible pop creations unlike most anything on the radio.   Their foray into freestyle didn’t feel new or exciting – it felt sluggish.

Sluggish and, well, familiar.  Some have noted that “Domino Dancing” bears a similarity to the song “Elle est comme les étoiles” by Desireless. For my money, though, “DD” borrows heavily and obviously from Denise Lopez’s “Sayin’ Sorry (Don’t Make It Right).” Go back and listen to the bouncy synth in Lopez’s song, starting at the 18-second mark. The “DD” synthesizer is a slower, minor key version, no?

But the most important thing about “Domino Dancing” is its video, which depicts a love triangle between two young men and one girl. Rolling Stone magazine calls the video “probably the most homoerotic pop video ever made,” citing the slow-motion shots of the boys wrestling on the beach:

“(T)he video exemplified the mainstream exploitation of gay sex in the Eighties, most evident in Calvin Klein ads and feature films like “Top Gun.” Unfortunately, “Domino Dancing” was every bit as dishonest, titillating the straight world with images it could never acknowledge, then doubling the repression by keeping openly gay expression closeted.”

I kind of agree with this take, but one must remember that, in the 1980s, we were so starved for LGBTQ representation in the media that any tidbit was immediately noticed, passed around, revered and scorned in equal measure. Our current approach to LGBTQ representation in the media is so, so far beyond what it was in 1988 that it might be hard to understand how …grateful we were for a video such as this. We might have had some issues here and there, but mostly we were excited and happy to be noticed and included.

Aside from the beach wrestling, the moment in the video that most captured my gay imagination comes at the very end, in the shot reflected in Chris Lowe’s sunglasses. As the song fades out, the two young men – the apparent rivals – slowly approach each other near the bonfire on the beach. 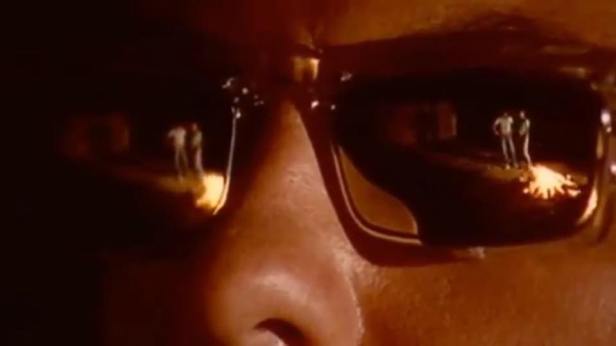 What exactly should we make of that shot? Throughout the video, whenever the boys start displaying some homoerotic attraction, we see that same close-up of Chris Lowe peering at them through those sunglasses. It represents society constantly monitoring these two young men, to the point where the only acceptable way for them to work out their attraction to each other is by fighting. It’s an actual male gaze being titillated by the physical contact between these young men. It’s a sly acknowledgement by the still-publicly-closeted gay artists who made the song – a nod to those in the know. It’s sort of ominous. And all of that is kind of what it felt like to be a young gay man in 1988.