I’ve never been into sports. Other than a period in my 20s when I bowled for copious amounts of beer and nachos (mission successful) to impress dates (mission not-so-much), I have never been the “athletic” type.

Instead, I wallowed in the dank pit of liberal arts degrees and history lectures and poetry reading and studio art classes and being broke. But parts of my healthcare-paying-for job would be much easier if I had a clue.

I could go to games and speak with friends and colleagues and learn to love a sport. But it’s January and that takes effort.

What I do have is a Nintendo 64, and a bucket o’ games I have collected over the years, thanks to friends’ need to dump junk during moves from one apartment to another, or the desire to focus on personal growth and professional development over playing Mario Kart.

I’d measure success if I am able to understand when my coworkers say something like “Gronk was clutch” because — and I mean this in all seriousness — I have no idea what Gronkowski does other than Dunkin Donuts ads.

Using a Nintendo to learn something is really saying you have no intention of learning anything. But guys, it’s so easy.

(In which I succeed by failing repeatedly to figure out how to throw a pass correctly.)

Football. Damn, guys. That trivia. Those uniforms. The rules within rules, including rules on the typeface used on the field.

I’m intimidated by things like hard work and commitment to something larger than yourself, so to me football is a nightmarish hellscape of accountability and maturity.

Also, I have weak Tyrannosaurus Rex arms, and flail like one of those inflatable car dealer guys when I try and fail to throw a ball.

Which is why I love “NFL Blitz”: like many things in my life, you can fail upwards if you don’t try very hard. To wit, I never figured out how to pass, kick, or defend correctly. I stuck with running the ball, and that meant running with 1997 Patriots quarterback Drew Bledsoe (who was the guy before that guy).

And yes, you can win without having any idea what is going on.

“Blitz” tries to make you feel smart. You can pick plays. I have no idea what any of them do, so I choose ones with arrows that make aesthetically pleasing designs, something like if Mondrian and Matisse were stuck waiting for a bus and had sidewalk chalk while splitting a beer. 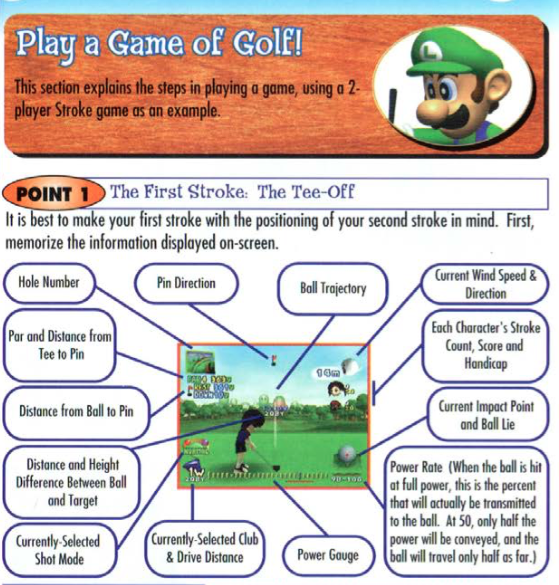 (In which you hit a fucking ball with a fucking stick using this diagram. Also, fuck you, Luigi…)

Luigi is no man. He is a remorseless killing machine, a cyborg sent back in time from the future to ruin your day with a series of perfect shots. Until you beat him, and you won’t, you are stuck playing golf as a baby in a red hat. Fuck you, Luigi.

Mario Golf offers a playing green much like the real sport. Unlike the real sport, you can plot your shots with enough computer mapping and targeting tools to plan a small tactical strike against a rogue regime, possibly one run by a cyborg sent from the future.

The game is all about planning. I’ll use the 2 iron to shoot into the wind, blowing at 5 miles per hour from the west. then I’ll land on the green between the two trees, and put again, this time on the hill. MISS.

Fucking Luigi then goes next.

(In which basketball goes all Cronenberg…)

This sort of made me relive middle school gym class. “Hangtime” is simple enough — two on two, you can run, block, pass, and shoot — and offers the basics from any NBA game, including launching two-man somersault dunks that set nets on fire while hollering like Tarzan.

The computer is also a total dick ball hog who is a jerk. Middle School Basketball John was really good at sort of running near where the ball was and having a good-enough view (notwithstanding someone else’s nearby armpit) of someone else with the ball sinking a shot.

In “Hangtime”, I am Middle School Basketball John: after the eighth or so time I landed a shot clock violation (an aside: there’s a shot clock in basketball! And I learned what a shot clock is! And also, what the fuck?!?!), the computer basically kept the ball for the rest of the game. So the game really played out as 2-on-1, while I sorted of waiting until it was all over and the cool kids went to lunch and I would have free time to sneak in a chapter from a “Star Wars” expanded universe novel (“Force Awakens,” my ass).

I spent more time with “NBA Hangtime” thanks to its “Create a Player” option, and by that I mean, once I figured out how to play as Matthew Perry from television’s “Friends.” There is also an oversized head option, which really shows off Dennis Rodman’s hair color. (Spoiler: YOU CAN SELECT HIS HAIR COLOR.)

Luckily, my skills favor the management side of the game; I created two-man teams co-starring of Matthew Perry and later, of course, a chicken that evolved into a 7′ 6″ Celtic named Cornelius.

Matt is fleet of foot; Cornelius is not one of those stereotypical “good” players. He lumbers down court in sort of a trot with the hope he’ll just run into the ball.

But he’s really just happy to be there, playing among the stars. Or at least running in a mad scramble, hoping to get Matt’s autograph.

(In which your best move is just to chill out, after making sure your buddy is comfortable, too.)

I’d forgotten the watching-a-butterfly-flutter-through-the-breeze-like joy of seeing grown men bounce off a set of ropes and clothesline each other and/or smacked in the face with a chair.

“WCW/nWo Revenge” (note the correct spelling) is joy. On the surface, it’s a bunch of angsty performance-enhanced white dudes busting each other’s faces in while crunchy soundtrack consisting of riffs from a Staind cover band’s sound check plays in the background.

These grim faces are merely masks! How can you not feel your soul soar, like listening to Barack Obama’s 2008 election night speech, with gameplay modes like these?

But “WCW/nWo Revenge” has little to do with competition, really. It’s not a sport of beating the shit out of your opponent like boxing or Jeopardy! with Alex Trebek. Wrestling is more like chess, albeit played by men in their multicolored tighty-whities.

In “WCW/nWo Revenge,” winning is pinning your opponent; instead of wasting time in fruitless pursuits, your best move is laying down on the ground until you win.

It turns out that “WCW/nWo Revenge” is not a violent game, but a digital experience of knowing what you want and who you are, despite the noise around you.

“WCW/nWo Revenge” is a lazy Saturday morning with a cup of tea, a dog-eared copy of “Love in the Time of Cholera” you bought from that second-hand store run by the nice lady in tweed, and watching the snow drift gently outside the window.

On the feathered edge of the 1990s came “Tony Hawk Pro Skater.”

A codger already in his 30s when this game came out, Tony Hawk promised a generation of formerly young men (and they are all men) that success could be achieved through Doritos, Mountain Dew, ripped Dockers shorts, and a deep understanding of “Beavis and Butthead.”

To play, Tony rolls around on his skateboard, and you try to perform stunts.

It gets easier if you notice he handles more like a shopping cart at a grocery store, and imagine yourself having to duck-and-weave around retirees arguing over the merits of name brand versus generic tuna to win.

Really, the whole game is an adulthood simulator for then-young adults who really wanted to avoid becoming adults.

To progress, you collect VHS tapes (five per level). This isn’t ironic. This was bleeding-edge relevant in 1999, when computers ran on diesel and then you got to use the internet for about two hours a month.

The full 90s-at-the-grocery-store atmosphere is completed by the soundtrack, which offers ska on an endless loop.

“Tony Hawk” uses the Nintendo controller’s crosspad, which means playing this game involves skills you learned paying by card in the checkout line. And you just keep performing tricks, earning points, and performing more tricks, not out of some sense of joy, but just because you need to quantify your leisure time, goddammit.

“Tony Hawk” was/is preparation for the day when adulthood really begins: You’ll know it the first time you have finish grocery shopping before you and your partner/spouse get home from work, so you have time to argue about whose turn it is to make dinner, giving up and deciding on takeout, and then giving up yet again and ordering from Domino’s.

The game about youthful dreams is really a trainer for the mundane of adulthood; like the guy who glues a Metallica sticker to the back of his Subaru all-wheel-drive wagon that he uses to pick up the kids from karate class.

But at least the game’s soundtrack is on Spotify while he waits in the car.

I actually know how to play baseball, thanks to an incredibly awkward period in life when my parents thought I could both run and keep my eye on a flying ball and catch that ball despite my inch-thick Coke bottle glasses.

True story: My proudest moment in sports was when I hit a double. The coach, who was a good guy, gave me the game ball. Then my feet grew three sizes that summer and I developed the athletic skill of a large rock rolling downhill.

What’s great about “All Star Baseball 2001” is how much the game does not care about skill. Just do what you feel like, man. “You see that sun up there?” the game says to you, “Wouldn’t be nice to just walk on sunlight, feel the breeze of that wonder?”

If Bob Ross had been a video game, he would have been “All Star Baseball 2001.”

When the other team hits an infield double, it’s up to you to pick up that ball. But say you don’t want to? It’s your own little world, man.

Walk around the park, take as long as you want. Walk along the baseline. Check out the visitors’ dugout. Stand behind home plate for a couple hours. See those happy trees. Be in the moment.  In my college art class, someone painted over the bureaucratic classroom clock with a thick layer of white; scrawled over that was the admonishment, “There is ALWAYS time.”

FWIW: The arts, including dance, are relevant to us all.

Sure, I’m still That Guy Who Doesn’t Like Sports (What The Hell Is Wrong With That Guy?). It’s cool. Because I can finally say I won a football game. Just don’t ask me what Gronk does.